How your inner ear can influence your emotions 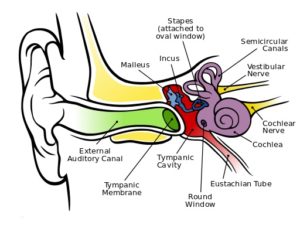 We tend to think of our emotions as being strictly tied to our psychology and personality — some people are highly emotional and others are not. But did you know your inner can profoundly affect your emotions?

Our inner ear, called the vestibular system, is integrated with the eyes and the brain to tell you where you are in space and is integral to survival, safety, and attention.

This system is a labyrinth of the semi-circular positioned in right angles to each other so they can perceive motion in three-dimensional space.

You engage your vestibular system when you turn your head, change positions, look one direction while moving in another, balance on one leg, ride a bike, and so on. The vestibular system also plays a role in integrating gravity, acceleration, and deceleration.

In summary, the vestibular system works with your eyes and your brain to keep your body stable and aware of where it is in the environment around it. Imagine driving while holding a glass of water and how accelerating, driving at an even speed, stopping, and turning affect the water in the glass. This is somewhat how the vestibular system, which contains fluid and sensory hair cells, works to deliver information to the brain.

Unfortunately, the inner ear can be quite fragile and vulnerable to damage from concussions, micro-traumas to the brain, and whiplash. Many people have vestibular system damage or disorders that they are not aware of.

Some hallmarks of vestibular problems include poor balance, dizziness, and being easily prone to motion sickness.

A poorly functioning cerebellum also plays a role in vestibular dysfunction. The cerebellum is the area at the base of the brain — it works closely with the vestibular system and is integral to balance and coordination.

When your vestibular system is damaged, or when there is dysfunctional coordination between the inner ear and the cerebellum, your sense of balance and stability are affected. The body ultimately perceives this as a stressor.

Typically, vestibular dysfunction is too subtle for most people to notice. Yet it nevertheless creates a sense of neurological confusion the brain and body perceive as chronically and subtly terrifying, thus putting the survival system on red alert and raising stress hormones.

People who have experienced anxiety after being on a roller coaster or from spinning may understand this connection.

Researchers are able to impact a person’s depression, anxiety, and other emotional states by activating and rehabilitating the vestibular system, lending further weight to the connection between the inner ear and emotions.

Fortunately, functional neurology is well grounded in the examination of the vestibular system, identifying dysfunction, and creating customized exercises to help you rehabilitate your vestibular system and brain.

This can bring not only relief from physical signs and symptoms, but it can also lower anxiety and relieve emotional symptoms. Ask my office for more information.